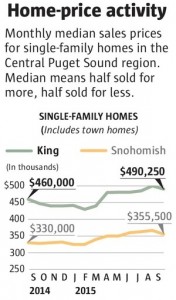 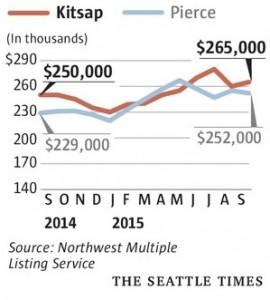 The median price of condos sold in King County last month jumped 16 percent over the year to $304,950. The median price in downtown Seattle, the largest condo submarket and where pricey new condos are being built, was $712,250. 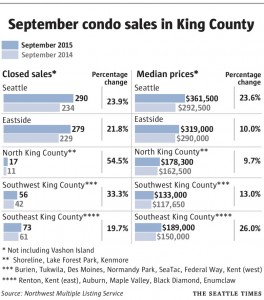 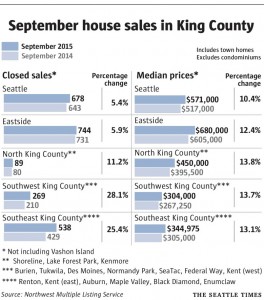 The tight home supply won’t improve in a meaningful way until more new homes get built, experts say. From January to August, there were 5,863 permits for single-family homes in the Seattle metro area, down 3 percent from a year ago, according to the National Association of Home Builders. 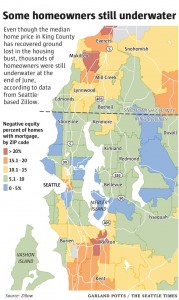 After the most brisk summer selling season in a decade, the Seattle area’s home prices showed signs of easing in September.

Potential buyers may welcome a cooling, but it’s grim news for the large slice of the region’s homeowners whose mortgage debt remains greater than their home’s value.

September’s median price for single-family homes sold in King County was $490,250, up 6.6 percent from a year ago, but down 2 percent from August, according to figures published Monday by the Northwest Multiple Listing Service. See the report here.

Although home prices have rebounded strongly since the Great Recession, more than 33,500 King County homes had negative equity at the end of June, or 9 percent of homes with a mortgage, according to Seattle-based Zillow, the real-estate website.

The thousands of underwater homes, while not as severe a problem as in years past, contribute to the shortage of homes for sale.

There were just 4,257 single-family and condominiums listed for sale in King County, down 30 percent from 6,107 a year ago, the MLS reported Monday.

The worsening drought in listings has helped fuel intense bidding wars and the most heated summer of sales in a decade: June’s median home price, $500,000, surpassed the last record set in July 2007.